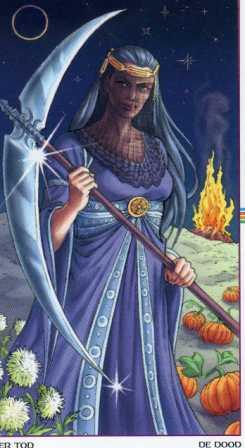 What does the Death card mean to me when it comes up in a reading? Well, there is no clear cut answer. I seldom see it as an actual death. To me, it is more of a transformation—saying goodbye to the old, and welcoming in the new.  Sort of like a New Year’s Eve resolution—hope for change—hope for something better.

As with all cards, the interpretation can vary, depending on surrounding cards, the question, and so many variables.  I remember when I first began reading tarot, I was asked by a friend to do readings at a family fundraiser. I was nervous, but I knew so many of the people who would be there, that I said okay.  Everything was going well. I was enjoying doing the readings.  Then something happened that I would not know the full extent of it until some time later. I read for one person, and of course, the death card came up.  She immediately was uneasy and a bit frightened.  I explained that this card rarely means an actual death, and proceeded with the transformation/change description.  That also seemed to fit into the reading well enough that I hardly gave an actual death another thought.

Not long after this event, the person’s father passed away rather suddenly.  Other family members told me how she was affected by the card, and that she would never again have another tarot card reading. Now that I am more aware of the cards, when this card comes up in a reading, I study the surrounding cards, and the client and I will discuss if there is anyone close to them who is not well—usually the client will see the card and mention this on their own.

So, yes, the death card can foretell an actual death.  But remember, death itself has many facets. We have the physical death, the end of a relationship death, the death of a business partnership, the death of joy and beginning of a time of depression, the death of faith and belief, the death of the seasons as one dies and another begins.

Never judge the Death card at face value. Always dig deeper into the cards, and into the true meaning of why this card has shown itself in the reading. The possibilities are as endless as life and death.

(Death card from the Wheel of the Year tarot deck)