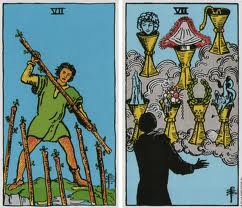 The Minor Arcana Sevens are all a bit daunting. They don’t generally have the scariest pictures, but they often represent times of difficulty. Many tarot students find them confusing to interpret or mistakenly interpret them as entirely negative messages.

To find meaning in Minor Arcana cards by number it is often helpful to look at the corresponding number card in the Major Arcana. In this case the Chariot may be able to offer us some guidance.

The Chariot is all about personal mastery. The Chariot is about heroic action, being in the driver’s seat and moving forward in accordance with your own will.

In all cases the Charioteer is the master of his own destiny. This mastery is born of his own doing – not the doing of anyone else. And that is a key to the Minor Arcana Sevens.

In each of the Minor Arcana Sevens we have a sense of individual responsibility. Each card depicts a situation that must be solved by a person on their own, without the aid or interference of anyone else. As with the Chariot, the Sevens reflect the inner journey that we each must take to discover our truth, to make our own decisions, to do our own work and to stand in defense of our own priorities.

Another key to understanding the Minor Arcana Sevens is to look at their suit element, and think of that in conjunction with the Seven’s sense of personal responsibility and individual introspection.

The Earth Seven, Seven of Pentacles, is the tired gardener. He must, on his own, continue tending his garden until it bears fruit.

The Air Seven, Seven of Swords, is the thief. His sense of integrity, or lack thereof, is his own responsibility.

The Water Seven, Seven of Cups, is the card of illusion. He must choose between many possibilities as he separates reality from illusion.

The Fire Seven, Seven of Wands, is the card of defense. He successfully stands in defense of himself against enormous odds and with no outside help.

In medieval times the numbers three, four and seven were considered sacred. It is interesting to contemplate the Three and Four cards of each suit, and see how their energies are present in the Seven of the same suit.

Multiple Sevens in a reading generally refer to the need for introspection and independence.

It is always good to have the help of friends and family, but sometimes we need to stand on our own. That, more than anything, is what I see in the Sevens of the Minor Arcana.