The Power of the Magician 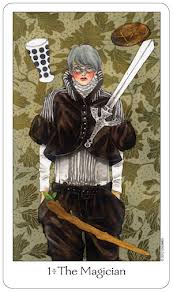 Card One of the Major Arcana, the Magician, is one of my favorite cards. I know that some people see the Magician as the trickster because he is able to create illusion. But just like my take on another very magickal card, The Moon, I resonate more with magick for healing and positive growth than trickery.

The Magician carries so many positive messages. On a very mundane level, the Magician can simply indicate education. The Magician tells us to be smart, to learn and to keep an open mind.

The Magician tells us to take a clear accounting of our skills, tools and abilities. With his arms pointing to heaven and to Earth he reminds us of the eternal sources of power in our lives.

The Magician is connected to the wisdom of Hermes who teaches “As Above, So Below.” Whatever is happening on a mundane level is also happening on a spiritual level, and vice versa.

Perhaps how we relate to the more magickal cards in tarot is connected to how we perceive the use of magick in our lives. If we are concerned with curses, jinxes and superstitious nonsense we might be wary of cards such as the Magician and the Moon.

If we understand magick to be a power that is our birthright – an energy we can use for healing – then we can count upon magick as one of our tools on our own Magician’s table.

← Looking for the Helpers Temperance, Tarot and the New Year →