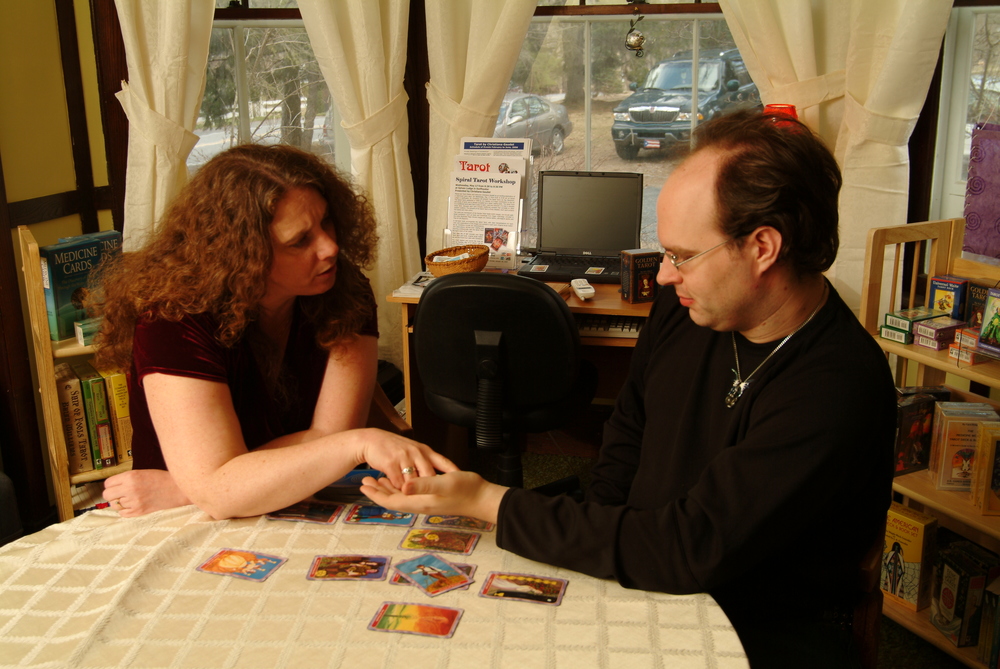 Decks of cards have become the usual tool for random token divination in our modern world. Even oracles that are traditionally stones, sticks or coins have card-based alternatives.

With so many card decks available I hear a wide variety of questions. Here is an attempt to answer some of them.

Divination is the practice of seeking wisdom and information by supernatural or spiritual means.

What is random token divination?

Random token divination is the term I’ve coined to describe any form of divination that involves the use of a group of objects (cards, stones, coins or other tokens). A small number of tokens are chosen at random to provide the reading.

How does card divination work?

Cards are drawn at random to reveal information or to provide a meditative focus. This process is called a “reading.” A reading may consist of a single card, several cards or a prescribed number of cards laid out in a particular pattern where each position has a meaning. This is called a “spread.”

What is your theory behind random token divination?

Random is by its own nature a spiritual force. When we use the power of random in divination we are allowing the Universe to communicate with us. Random works in conjunction with our higher selves, our spirit guides and our own intuition to help us see the tokens that we most need to see.

What is an oracle?

Originally the word “oracle” referred to people who were able to give psychic advice or channel information by spiritual means. The place where these people could be found might also be called an “oracle.” Now the word “oracle” can also refer to a tool such as a card deck that is used for divination.

Tarot is a card oracle used for random token divination, amongst other things. There are many traditions of tarot, but all tarot has a similar structure. Tarot structure includes two sections, a Major Arcana of (usually) twenty-two cards and a Minor Arcana of four suits similar to a playing deck. Each suit has a court, generally of four characters.

Lenormand is the name given to a specific type of oracle cards. Lenormand cards are named after Marie Anne Lenormand (1772-1843) who was a great card-reading psychic in France. Lenormand card decks consist of between 31-36 cards generally. They are numbered, and each has a very simple designation, such as Anchor, Fish, Key, Man and Woman.

Currently, Lenormand decks are experiencing a renaissance in interest and popularity.

Can one use a regular playing deck for divination?

Yes, there are numerous traditions of divination using playing cards.

What about angel cards, fairy cards and medicine cards? Are these cards tarot cards?

Unless you are talking about an “Angel Tarot,” probably not. Unless a deck has the general structure of tarot, it’s not tarot.

Why are there so many different tarot decks available?

There are many tarot traditions. These traditions include Marseilles, Waite, Crowley and modern traditions, such as feminist and archetypal. There are many decks within each tradition, and some that borrow from more than one tradition.

There are many themes that lend themselves to tarot. There are dragon tarots, baseball tarots, cat tarots and Goddess tarots, for instance. Tarot is based on archetypes. There are many ways to depicts archetypes, and many associations from art and culture for each archetype.

Tarot is a personal thing. Although there are images and traditions that are considered standard, everyone who studies tarot develops their own understanding of tarot. Artists and tarot designers enjoy having an opportunity to present tarot the way they see it. Many artists enjoy the challenge of creating a seventy-eight card body of work that follows a designated structure.

Do different tarot decks mean the same thing and give the same information?

What is the difference between a tarot deck and an oracle deck?

All tarot decks are oracles, not all oracles are tarot. Tarot follows a specific structure. Oracles follow the structure designated by their designer. Oracles do not conform to any particular structure or tradition.

There is power in tradition. In the case of I Ching, the thousands-year-old tradition of tossing the yarrow sticks holds its own power that would not be present in simply pulling a card to get your hexagram.

However, symbols are symbols, and divination is divination. If you are comfortable with the cards you will certainly find divination with them effective.

Does one have to be psychic to work with divination?

Perhaps we are all psychic. Intuition helps a great deal in interpreting oracles. Oracles themselves help us develop our own psychic ability. But where or not you consider yourself “psychic” you can enjoy and benefit from divination.

What is the difference between divination and fortune-telling?

Fortune-telling suggests that we have very little power to affect our own lives or create our own destiny. Divination gives us options, ideas and power in manifesting our own goals and desires.

I read two books on tarot that said two entirely different things about the meanings of the cards. Which is correct?

Just as there are many different tarot traditions, there are many different tarot readers. Each person develops their own relationship with the cards. The interpretations in a book will reflect the traditions favored by the author as well as the author’s personal relationship with the cards.
The job of the tarot student is to use books, classes, experimentation and exploration to decide what makes sense to him or her.

Use the books to help you figure out what the cards mean to you, and to help you develop your own relationship with the cards.

These are the answers of one tarot reader. Other card diviners and oracle users may have different and equally valid answers.

← Tarot Translation Group: What Does the Ten of Swords Say to You? Six Things to do When a Card Doesn’t Make Sense →