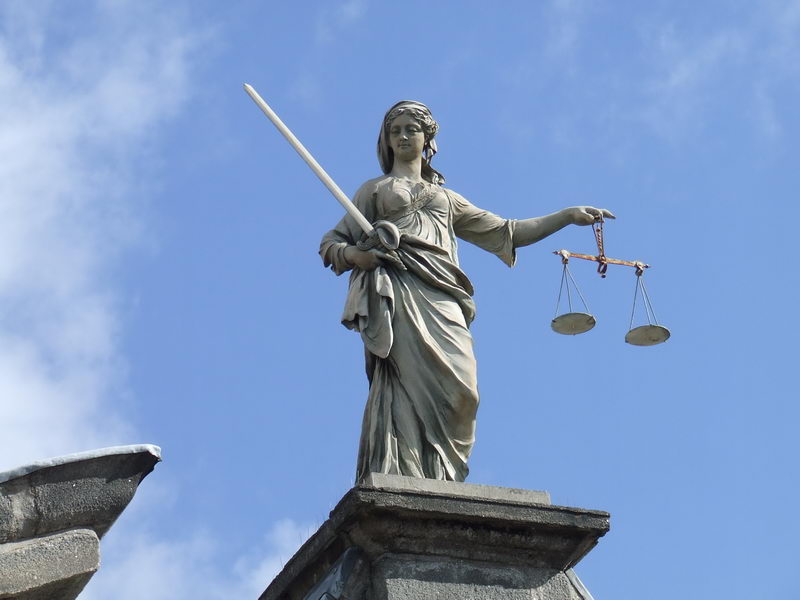 In lieu of controversial court results that have been published in recent months, Justice and Judgment are a bit depressed.  The rest of the Major Arcana have gathered around them to try to console and advise the pair.

The Fool explains that the justice system is not a guarantee of a favorable outcome on either side. He believes it is a chance each side takes, with the results unknown until the end is reached. The Magician agrees, and adds that each side can manipulate the facts. Sometimes the truth or even the lies can be twisted. The jury is entrusted to use the tools given to them to reach what hopefully will be the right conclusion. The High Priestess speaks up and says there is so much hidden knowledge that is not even allowed to be introduced into the proceedings. Jurors must sift through what is allowed, and use their intuition as to what they believe to be the truth, especially if there are no concrete facts available.

The Hierophant tells them that we all need to have faith—faith in the law, faith in humanity, faith in the ability to seek truth. Sometimes one just needs to break through the rigid rules for the sake of fairness and justice.

The Emperor states that the lawyers on each side, stand by their client, and must be unbending in the conviction to do what is right for their client. If they are sure the client is innocent, they try their best to prove it.  If they believe their client is guilty, they are not allowed to say, but must defend the client to the best of their ability.

Temperance comes in here, saying that in this case, the lawyer will try to make a deal for the client, not to lesson their guilt, but to ease their punishment, for the sake of compassion. According to The Empress, the jurors should be thought of in terms of teaching our children—we try to instill in them the values of right and wrong, allowing them to weigh the two, and hope they learned their lessons well enough to reach the right conclusion.

The Lovers say that no matter which side the lawyers are on, they are a partnership in each trial.  Evidence must be equally shared so that no bias exists on either side. Adding to the discussion about the lawyers, The Chariot        chimes in about control. Each lawyer must have his defense or prosecution under complete control, or he has not done a proper job of representing the client. He must take up the reins and do his best. Strength agrees about taking control, and not showing weakness.  The Wheel of Fortune comes into the picture at this point.  There will be ups and downs, which is why strength and control are important. The Hanged Man cautions that now and then, one must take a step back, changing tactics. On occasions, there may be no resolution, thus ending in a hung jury and mistrial.

The Devil and Death are sitting together, listening. Devil speaks up and talks about why this crime may have been committed. Was it drugs, greed, lust, or some other debilitating bad habit or vice that led the accused to commit such a crime? Death feels that if found guilty, the sentencing should consider whether the accused would ever be able to become a useful part of society and given a new chance, or forever be kept away from the freedom.

Each juror, says the Hermit, must search his/her soul to find what they believe to be the just conclusion. They have seen and heard evidence, they have taken notes, and they have the final word. The Moon brings up how emotional it can be for some to have to decide another persons fate. Hopefully, there will be a light in the darkness and a Star that will guide them to their own truth. The Tower cautions that if what appears to be the wrong decision is made, it should not be allowed to rock the foundation of our beliefs.

They all agree that Justice is intentionally blind, in order to be fair and allow both sides to present their case. If the verdict is correct, then The Sun will shine for Justice again. If the verdict is not what was expected, or not believed to be fairly reached, then Judgment comes into the picture. We all must answer for our deeds at the end. Karma and fate may be lurking in the shadows, and may appear at any moment.

After the meeting, Justiceand Judgment had renewed hope that everything in the World would be as it should be, and that they would reign true to their purpose once again.

← Answers to your Questions about Tarot: Which Way Should the Cards Face? Tarot in My Life: New Growth & Celebrations →