Answers to your Questions about Tarot: Buying a First Deck and the Wild Unknown Tarot 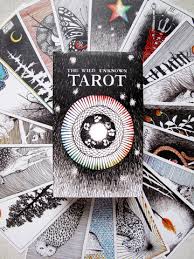 This may be a repetitive question (and long), but I hope you’ll be able to give me some help on something I’ve been thinking about a specific deck!

I’ve just begun my amazing journey of discovering Tarot, and have decided I’d like to pick up my first deck. I spent quite a bit of time shopping around trying to find one that jumped out at me, until I came across the Wild Unknown deck by Kim Krans. The excitement I felt told me immediately that this was the deck for me, however on closer inspection of the cards, I’ve noticed that it seems to be a weird mash up of the Waite deck and the Marseille deck, in that some cards show an almost identical depiction to the Waite deck (e.g. the Ten of Swords), while others seem to follow the Marseille tradition (the Two of Wands is just an illustration of two wands). I feel like this is one of those decks that, as you say, is almost its own tradition in itself.

The question I have about this deck is, how difficult would it be for me to pick up another deck after starting with this one? I definitely favour the RWS tradition and will most likely pick up decks of that tradition and was just wondering what you thought about this issue, and the deck in general 🙂

Thanks for the help, and keep the great videos up!

Thanks for a great question, Reece.

First of all, it is great that you are so knowledgeable about tarot even before getting your first deck!

I also appreciate that you are taking the long view and considering the foundation of knowledge you are building, and how it will serve you in the future.

Here’s what I think. The fact that you are diligent enough to do your research, have enough of a critical thought process to form a reasonable assessment of a deck and thoughtful enough to consider your future learning capacity tells me that you will be a wonderful tarotist no matter what you choose.

You could probably learn with seventy-eight numbered pieces of notebook paper and be just fine.

That being said, your first deck is a special thing indeed, and worthy of the consideration you are giving it.

I do not have Wild Unknown, but I would have to live under a rock to not know about it.

I am impressed with the fact that, although, as you say, it is not traditional in many ways, many of the professional readers I respect use this deck in their professional tarot practices. To me, that says something about the deck.

I agree with your assessment, too, that Wild Unknown is Waite-influenced, Marseille-like and very much its own thing.

There are three things I find interesting about Wild Unknown. The first I have already shared – I am impressed that so many tarot pros use it.

The second has to do with its use of color. I think the use of black and white with splashes of color is very evocative; and very good at stimulating the third eye to help make a real psychic connection.

The third is how much the art of Wild Unknown has been used in tattoos, and other sorts of art projects. More than many decks do, Wild Unknown is redefining how we think of tarot art and symbolism.

In regards to the question of what kind of foundation this deck will create for you, I think that when and if you move to a Waite deck, or any other deck, you won’t be able to make a swift transition. It is likely you will have to learn the new images, and make conscious comparisons between the deck you know and the deck you are learning.

I think that is a great process, and one that is worth doing. I don’t think Wild Unknown will spoil you for other decks, and I do think it will be a great foundation in that its structure seems to be fairly traditional, even if its art is not.

I also think Wild Unknown will give you a good foundation for learning any other tarot tradition, not just Waite or Marseille.

I think there will always be traditionalists who need Strength to be a woman and a lion, or the Magician to be a guy at a table with his tools. For those people, Wild Unknown will never be a great deck.

If you find the images striking, evocative and expressive of the tarot archetypes, as many people do, I think this will be a great beginner deck for you.

And it looks as though I have a new deck to buy. Thanks a lot, Reece, for encouraging my tarot deck buying habit!

Truly, thanks for a great question. If you have a question about tarot, please email me.