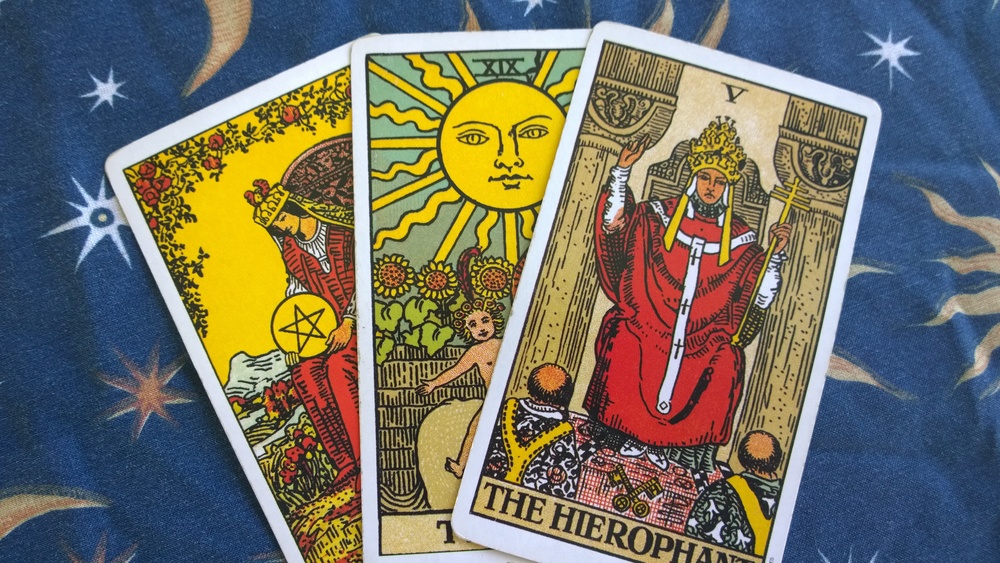 Tarot is more than divination, more than prediction, and more than interpretation. Tarot is a book of spiritual wisdom in picture form.

Basic Ways to Learn Tarot
Memorize interpretations and key words.
Make connections with the images.
See how the cards that come up reflect real life.
Deeper Ways to Learn Tarot
Feelings
Which cards attract you? Choose the card that is your favorite for today. What does this say about you? Choose the card that is your least favorite today. What does that say about you? How do these two cards compare and contrast?
Do you have a Significator? Is that card, in your mind, similar or opposite to other cards? Which ones?
Do you have a card that has been coming up very often for you recently? What does that mean to you?
Storytelling
See how the cards in order tell a story. Find the stories in the Major Arcana, and each of the suits.
Within each suit, find runs of three cards and see the stories that they tell.
Think of an event in your life, and find a three card run within a suit that tells that story.
Play other Tarot story-telling games. For instance, pull four cards at random, and make up a story based on those for cards.
Play action Tarot games such as charades or improvisation.
Meditation
Choose a Tarot card, and hold it in front of your eyes, while doing meditative breathing. Go into the image, and see it come to life.
Have a conversation with the character in the card.
Become the character in the card.
Breathe in the essence of the card.
Meditate on the card meanings, and ask Spirit for greater insight into the card.
Comparative Tarot
There are on-line resources for this style of Tarot study.
Choose a card to study, and look at that same card from a number of different decks. Compare and contrast. What do you learn about the card?
If you were to design a card, what would the image be?
Find Major Arcana cards within particular themes. For instance, which popular TV shows embody which Major Arcana cards? Which Beatles’ Songs?
Take a song or verse and illustrate it with Tarot cards.
Find Tarot images wherever you go.
Grouping
Find Major Arcana cards that have similar themes, and group them together. Within that group, compare and contrast the cards.
Sort through the entire deck and find particular images, such as tools, or birds, or animals, or children, by which to group. Once you have assembled a group, see if the cards have anything else in common.
Group cards together according to numbers, and compare and contrast within the group.
Find cards that seem like opposites, and compare and contrast them.
Find cards that seem to have similar meanings, and compare and contrast them.
← Answers to your Questions about Tarot: Buying a First Deck and the Wild Unknown Tarot Lammas Wisdom →