Ste McCabe from The Tarot Cat explores how death brought him to the tarot and asks – which tarot theme brought you to the cards?

Like all tarot cards, the interpretations for Death can be endless depending on the deck you’re using, the position the card appears in the spread, what cards are near it, the question asked of it – all kinds of factors. I don’t believe in being too prescriptive with ‘keywords’ when reading tarot, but having said that, there are a few common Death themes that most tarot readers agree on that ring true for me too – themes such as personal, revolutionary life transformations for example. Out with the old, whether you like it or not. The new chapter will be coming soon, but perhaps after a bereavement of some kind.

In most cards, you’ll see a figure looking fairly morbid, sometimes clearing away old bones. The Death card sits at number 13 in the Major Arcana, sometimes without saying Death on it at all; it was a nameless card in most decks for centuries, and has been considered an unlucky number for many reasons since. Fear not though, my chickens, as there’s plenty of cards with positive, uplifting messages following in the Major Arcana’s progression after death. 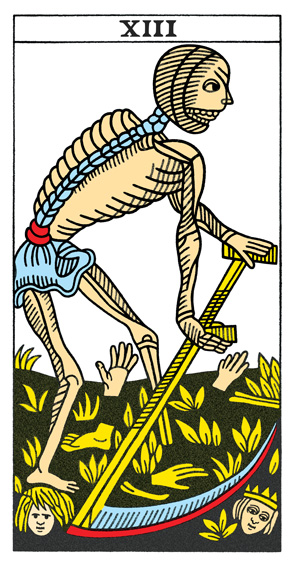 Ask the average tarot reader about the Death card and the first thing they’ll say is ‘don’t worry, it doesn’t mean actual death!’. Well, actually, sometimes it does. Essentially it can be a card of revolutionary and difficult change, so it stands to reason it can be understood in the most literal sense too. I realised this for myself when doing a reading for a friend a year or so ago, whose mother had died not so long earlier. When the Death card fell into place I began the (subconscious) usual avoidance of the literal translation, when she turned to me and said, that’s talking about my mum’s death. Never has a tarot miss been so glaringly obvious for me; I’d spent the previous months chatting with her about this awful event in her life, and yet such was the level of my hippy tarot indoctrination that I still misunderstood what should have been the most straight-talking card on the table. Of course, most of the time the Death card is speaking metaphorically (as the cards do!), and personally I’d only explore the possibility of an actual death if the card was in a past position, or if the querent had brought that topic to the table themselves (with a lot of consideration and sensitivity in both cases). Tarot should be insightful and useful. It can give us difficult home truths for sure, but it should never be downright f*cking terrifying! It’s unethical and potentially very damaging to be talking about a death lurking in someone’s life unless you already know it’s a given. That aside though, as I learned, death can mean death; we just have to know how to work with that if it does appear in a reading, and to give someone the chance to talk about it if they want to.

Death of the Physical

When I first became obsessed with tarot, eleven years or so ago, it was shortly after my dad died. In retrospect, I was looking for something to help me understand life, death and to open up the possibility of something else happening after death. In 2004 I found myself buying a Tarot of the Cat People  deck from a New-Agey book shop in Manchester (England) and was pulled into a world of beautiful symbolism which helped me deal with his death in the most beautiful way I could have hoped for. Ultimately, it was a spiritual connection I was experiencing with the cards the first time around. Subsequently, as I slowly started doubting the concept of the afterlife and ‘another realm’ (yes my dear spiritual hippies, it does happen and it’s okay), the cards slipped into the background in my life.

Death of the Identity

It’s ten years later. I’ve been a musician with a passionate music act who has been constantly performing and releasing records for almost my entire adult life. Around the time that this major phase in my life was dying (once again, against my will), my friend bought me the gorgeous and surreal Nicoletta Ceccoli deck as a Christmas gift. At first, I peeled off the wrapper and gorked. Tarot? Now? All that creepy-cute, little-girls-with-massive-heads artwork, too (even if I did still care for tarot, I’d never choose a deck like this for myself!). But I pulled out the cards regardless, and even with a Christmas Day hangover from hell, within one hour I was back there again, simply appreciating how incredible it is that these images and symbols developed by human beings, for other human beings seem to capture pretty much all of the major themes we experience in life. I became obsessed like never before, only this time keeping an open mind as to what’s going on with tarot. Whatever is happening, I decided, it just doesn’t matter. I was sick of music, sick of the underground punk communities I was involved with, sick of the politics, and – to an extent – sick of people in general! Exploring the phases of my life through someone else’s symbolism and artwork was powerful and moving; it made me feel small, insignificant, and all the more amazing for it. Move over, massive ego, you’ve had your decade. Here was the tarot again, giving me a new passion and focus in life, helping me through this metaphorical death that I was kicking so slowly and pathetically against, and I began a professional tarot reading service with a desire to share it with others. I adore that Ceccoli deck now too (big-headed-little-girls and all); it really is like being transported to another world, and that’s very welcome at the moment. I honestly don’t like this one very much right now.

Death in both its literal and metaphorical sense is what brought me to tarot, and yet the card is cheeky enough to never show up in my own readings, despite it being a card I am very comfortable with. Perhaps the cards which don’t have strong lessons to offer at any given time in your life won’t show up for you. What can such a card have to actually offer anyway? Death has brought me to the tarot twice over; I am still feeling its impact in my life on a daily basis, so it stands to reason that I don’t have anything to learn from it right now. On the other hand, the skeptic side of my tarot brain (it’s still active babes, and I embrace it) says perhaps it’s just a coincidence not worth reading into. I honestly find tarot amazing, whatever is – or even isn’t – going on. Either way, the tarot holds my hand through both life and death, and for that I am so happy to have discovered it.

Perhaps, like me, the tarot “theme” that brought you to the cards is not one that you see reflected in your own readings. Have a think; how did you discover tarot? Was it family (10 of Cups)? Childhood (6 of Cups)? Pure chance (Wheel of Fortune)? Destructive habits (The Devil)? Take the suitable card out, do a bit of work with it, and give it an appreciative thumbs up. You’ve got a lot to thank it for!

← Answers to Your Questions about Tarot: Why wouldn’t you want to do a reading? Advice for Pro Tarotists: Everyone Wants Tarot Readings! →