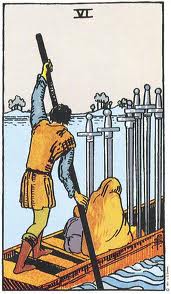 An interesting thing happening in our American culture is that “scientific” data seems more malleable than ever. There are powerful people in our country who seem unsure about everything from how women get pregnant to whether it’s okay to genetically modify our food to whether people in ancient times might have used dinosaurs for transportation.

The problem is that these “new” ideas about science aren’t coming from new research or new evidence. They are coming instead from a need to manipulate. They are motivated by political and economic expedience.

Those who use true scientific method are often scorned in favor of those whose theories people find more comforting. Perhaps Bill Nye is our modern-day Galileo.

Should true science ever be motivated by profit or politics? Tarot offers us an easy answer in the Six of Swords.

The number Six in tarot is the number of victory. In the Six of Swords, we see the victory of logic over emotion.

In the Crowley-Harris-Thoth Tarot, the key word printed on the Six of Swords is “Science.”

In the Rider-Waite Smith Tarot we see a family in a small boat. They are literally sailed toward smoother waters; the water behind them is choppy while the water ahead is placid.

There are six Swords standing upright in the boat.

The Swords, symbol of logic, are moving above the water, which is the symbol of emotion.

The family is sailing to smoother water because they are choosing logic over emotion.

To me, a poignant message of the Six of Swords is this. Sometimes our journey is smoother when we trust the facts, and when we choose not to cloud them with emotion.

People feel an emotional attachment to their myths, and that’s fine. But when we don’t understand that our myths are myths, or when our emotional require us to manipulate facts, nothing can move forward.