Maypoles I Have Known and Loved 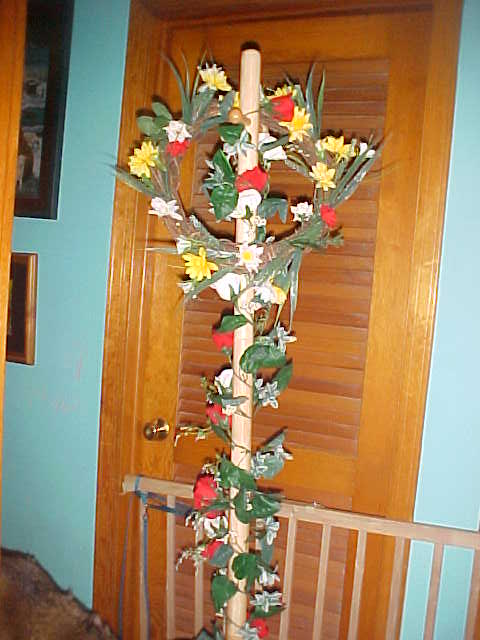 Beltane (May 1) conjures a lot of memories for me. Because it is a spring celebration and there are so many fun Beltane traditions it is typical to celebrate the holiday with other people, even if you tend to celebrate other turns of the Wheel more privately.

My first Beltane gathering was also the first time I acted as priestess for a large group. I didn’t priestess the Maypole, but I did perform a handfasting at the day-long event.

This gathering happened at Devil’s Hopyard in Connecticut in the 1980s. It was the first time I had ever seen a Maypole.

Well, I had seen pictures of schoolchildren dancing the maypole. Discovering the maypole as a fertility rite was quite a different matter!

A few years later I was honored to be priestess at a Beltane celebration at a private home. I’m afraid that the pole was a bit short and the hole was a bit shallow. I ended up sitting on the ground and stabilizing the pole during the dance. The energy of that was amazing – to be sitting in that vortex of fertility and creativity.

I ended up having to do that same thing a few years later at a Beltane Tarot Circle meeting. A member had made a beautiful maypole out of a coatrack.

One year I rented a conference room in a hotel and we used a maypole in a Christmas tree stand. Our ritual honored the four elements. We had ribbons colors for each element and each person had to dance with a ribbon that honored the element they most needed to bring into their lives.

My son was born in early May. After he came along our Beltane celebration would often include a birthday celebration for him.

When he was three we gathered at Kettletown State Park in Connecticut. We had a wonderful day with our kids, dogs and guitars. Our huge maypole was a multi-colored extravaganza as we laughed and danced. Ultimately we ran around the maypole until we were dizzy.

In another field in the same park we found a solemn group of Wiccans with their own Maypole wrapped precisely with black and white ribbons. We were all dressed in tied-dyes and colorful prints. They were in somber black robes.

It was nice to see other folks enjoying their traditions in the same park, and nice to see how each group expressed the magick of Beltane – so differently in some ways and so much the same in others.

I was lucky to be a presenter at a large Beltane festival in Connecticut. There we danced a thirty foot maypole to the tune of renaissance instruments.

The following year at the same festival I led the women in digging the hole. I wrote a chant for the occasion.

We prepare the Earth
With reverence and mirth
It’s the season of rebirth
It’s Beltane!

I’ve used that chant every year since.

I led a much smaller skylad Beltane two years in a row. The second year we created a chant for the men as they fetch the pole.

We prepare the pole
with reverence and soul
rebirth is our goal
It’s Beltane.

That year I learned that it can be a problem to use streamers as ribbons. The first year it wasn’t humid at all and the (inexpensive) crepe streamers worked well. The second year the crepe was soggy. Many of the ribbons ripped. That was probably the least successful maypole of my life.

Last year I did a small maypole with a group of women. It is interesting how the Beltane energy is expressed in sisterspace.

This year the Beltane season has brought us a lovely new home. I am already scoping out where to put the maypole for next year.

If there is one thing I have learned over the years it’s this. There is no one right way to do things. Some ways work out better than others. At the end of the day it’s not about the size of the pole or the perfection of the dance. The celebration of spring, renewal and fertility is all that matters. In that way, and in many others, the maypole is a wonderful analogy for life.