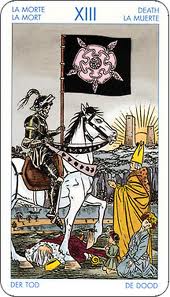 Have you ever noticed how easily many of us speak of death, dying and killing in the first person?

“It will kill me if I find out he has a new girlfriend!”

“It’s killing me to have to live in Florida.”

“I will kill him if he scratches that car!”

“I will die if I can’t have that dress!”

Often we speak these sorts of statements with so much vehemence that some might wonder if we really believe our life is on the line.

Sometimes in our vernacular “dying” is a good thing.

“Mama will just die when she sees this house!”

“The movie was so funny we died laughing!”

I’ve often found these exaggerations disturbing. No, you won’t die without your boyfriend. Really.

On the other hand, I don’t believe, as some metaphysicians do, that we shorten our lives when we say such a thing.

Words do have power. At the very least, saying that something is killing you certainly takes away some of your power to fight it.

I wonder where this idiom comes from, and why we so cavalierly toss around words like die and kill. Sometimes it seems that the people who do this tend to be a bit dramatic overall, and sometimes to their own detriment.

Maybe if we take the extreme words from our language we will also remove some of the emotional extremes.

In the Major Arcana of Tarot, card thirteen is Death. Typically, Death does not discuss an impending physical death. Death generally predicts a major change in life, such as a pregnancy, a job change or a wedding.

Let’s look at the statement “It will kill me if I find out he has a new girlfriend!” What if instead of “kill me” we looked at it through the perspective of Major Arcana 13, Death.

“If I find out he has a girlfriend I am going to have to accept some changes.”

We don’t physically die when we have to accept changes. Sometimes we feel like dying, though. The more quickly we accept the change, the less difficult the process is. The lesson of the Death card in Tarot is acceptance.