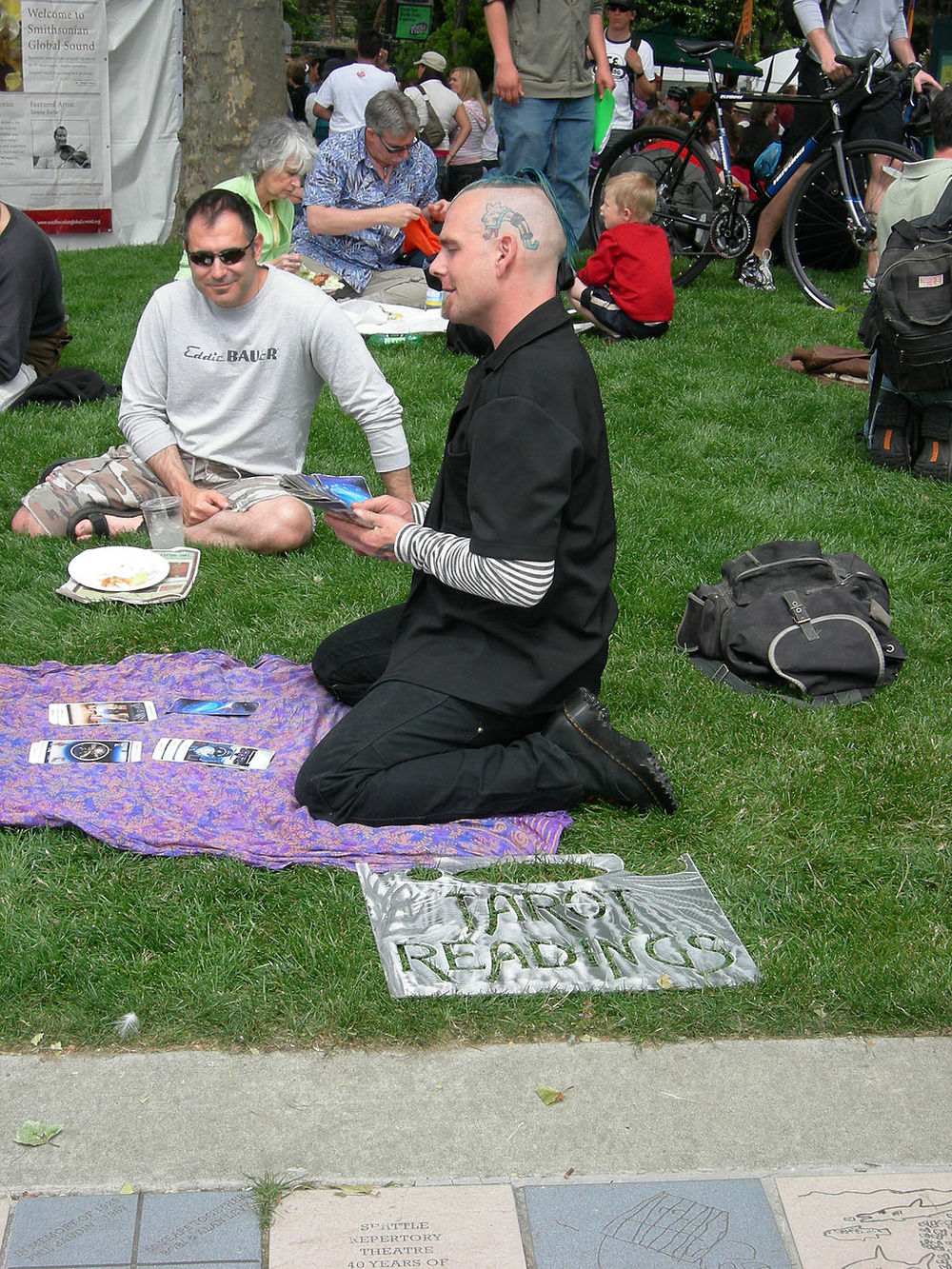 Welcome to the Spring Fling Tarot Blog Hop 2015, wrangled by Ania M. She’s given us a theme that is near and dear to my heart. Here’s our assignment.

The standard Tarot deck is over 500 years old and the cards are very much a product of that time, particularly the Major Arcana and Courts. So I am asking you to consider which cards you think need to be updated, removed or added to reflect our modern society?

Are there any glaring omissions? What is redundant? Which card has you scratching your head wondering where it fits in today? Or do you think that archetypes are so universal that there is still a relevant place for all, be they Hermits, Pages, Knights or Emperors?

You can focus on a single card or overhaul the lot if you wish. You can be academic and serious or utterly frivolous, rename the cards in modern context or create a completely new one or several, the choice is yours.

Some of my fellow tarot bloggers know that I ponder this topic often. I’m interested in the way tarot reflects culture, both artistically and mystically.

Classic tarot reflects the values of its time and place of origin in its images, and its interpretations. Tarot is, by birthright, sexist, classist and racist. We find evidence of this sad fact in the very structure of the hierarchal court, and in more subtle and disturbing ways throughout the deck.

I’ve always felt that the more negative interpretations for the Moon and the Queen of Swords were born of the misogyny of the medieval era. Who wanted a smart woman who spoke the truth, like the Queen of Swords? It would be simpler to see her as a bitch, rather than as the wise woman the Queen of Air should be.

The moon has always been the symbol of feminine spirituality and women’s mysteries. No wonder the tarot Moon traditionally carries a warning of treachery and evil magick afoot.

In the past fifty years, tarot artists and authors have made many attempts to make tarot more politically correct for our present times. The early feminist decks, like Motherpeace and Daughters of the Moon, paved the way for more gentle decks that depict people of all races sharing power, like World Spirit Tarot and Gaian Tarot.

Many modern tarot authors have offered newer interpretations of the cards in ways that help us see the wisdom of tarot through a more modern, inclusive lens.

Other modern tarot decks, like Chrysalis Tarot, have tried to transform some of the cards whose energies feel particular problematic, such as the Hierophant. Still other decks have tried to transform tarot itself, creating new tarot-like decks that use the structure of the tarot to express concepts like sacred geometry, as in Tarot of Transformation. Some deck creators erroneously suggest that they are actually returning tarot to its “original form” by adding to its structure.

I have two problems with some of the modern decks that change tarot substantially from its earlier form. First, while tarot images and interpretations may change, I believe the tarot archetypes are firm. A Hierophant is a Hierophant, whether you want to call him a High Priest or a Shaman doesn’t really matter, he still needs to carry the specific complex nature of the Hierophant as originally defined by his inspiration, the Roman Catholic Pope. Many of these types of modern decks morph tarot archetypes into something else, sometimes even saying they are creating “new archetypes.” That sounds like an oxymoron to me.

My second problem is operational. As lovely of the images of some of these modern tarot-oracle hybrids are, they aren’t fixed solidly enough in their archetypes for me to get a good reading out of them without learning a whole new system. I don’t mind learning a new system if it has real value. However, to me, many of these decks feel like watered-down tarot sprinkled excessively with unicorn dust.

Whether we look at tarot as a series of images, archetypes or interpretations, it’s important to understand that while tarot is truly a product of its time and place in history, tarot evolves to reflect the current culture of the times in many important ways. That this miracle happens is evidence to me of tarot’s special mystical abilities.

Tarot evolves with each new deck and book. The Nine of Pentacles shows an interesting example of how this happens.

Many of us learned key words for the Nine of Pentacles such as “security” and “inheritance”. Some of the new research regarding the Waite-Smith Tarot may shed new information about our historical understanding of this card. However, I learned that the woman in the Nine of Pentacles is of nobility. She is under her father’s protection, and therefore at leisure to be alone and unmolested.

Modern interpretations of this card don’t often discuss the antiquated concept of a woman’s security based on her father’s money and social standing. Often, we now see the Nine of Pentacles described as “confidence”, “being security in oneself” or the state of being “comfortably alone”. While the earlier Nine of Pentacles was secure because of her father’s protection, the woman in the modern Nine of Pentacles doesn’t need a man to provide her security; she is secure in herself.

No one person decided to make this change. What happened, as I see it, is this. As the culture changed, the way we see the card changed with it. The archetype of the Nine of Pentacles remains intact as the “woman securely alone.” Her backstory changes to accommodate the new paradigms of social norms in our culture. Modern tarot authors reflected the changes they saw in their own interpretations.

Another great example of the way individual cards retain their archetypes and yet morph over time is the Chariot.  While automobiles did not control the society of Italy 500 years ago as they do now, the vehicle card, the Chariot, has always had a primary role on the Fool’s Journey. How convenient for us in the automotive age, who need this card to help us keep track of all the many joys and traumas that our cars cause us!

I’ve also seen tarot morph in local culture. I was a reader in Putnam, Connecticut, as the huge casinos, Foxwoods and Mohegan Sun, were being built. Once they opened, the Wheel of Fortune began appearing in readings more than it ever had before. Now we had a casino, we had casino employees and gambling addicts. The Wheel of Fortune would appear to indicate both those conditions, where there had been no need for it before.

Rana George speaks of this phenomenon in her book, “The Essential Lenormand.” She poignantly shares that the Coffin card does not so often predict actual physical death now that she reads and resides in the United States, as it did when she resided in war-torn Lebanon.

My perspective on five hundred years of tarot is this. Tarot will always reflect its current culture in its art and interpretation. Although this happens, the archetypes of tarot remain largely unchanged. To me, the archetypes are timeless and perfect.

Who knows? Maybe centuries from now the Chariot will typically appear to discuss our frequent interplanetary travel.