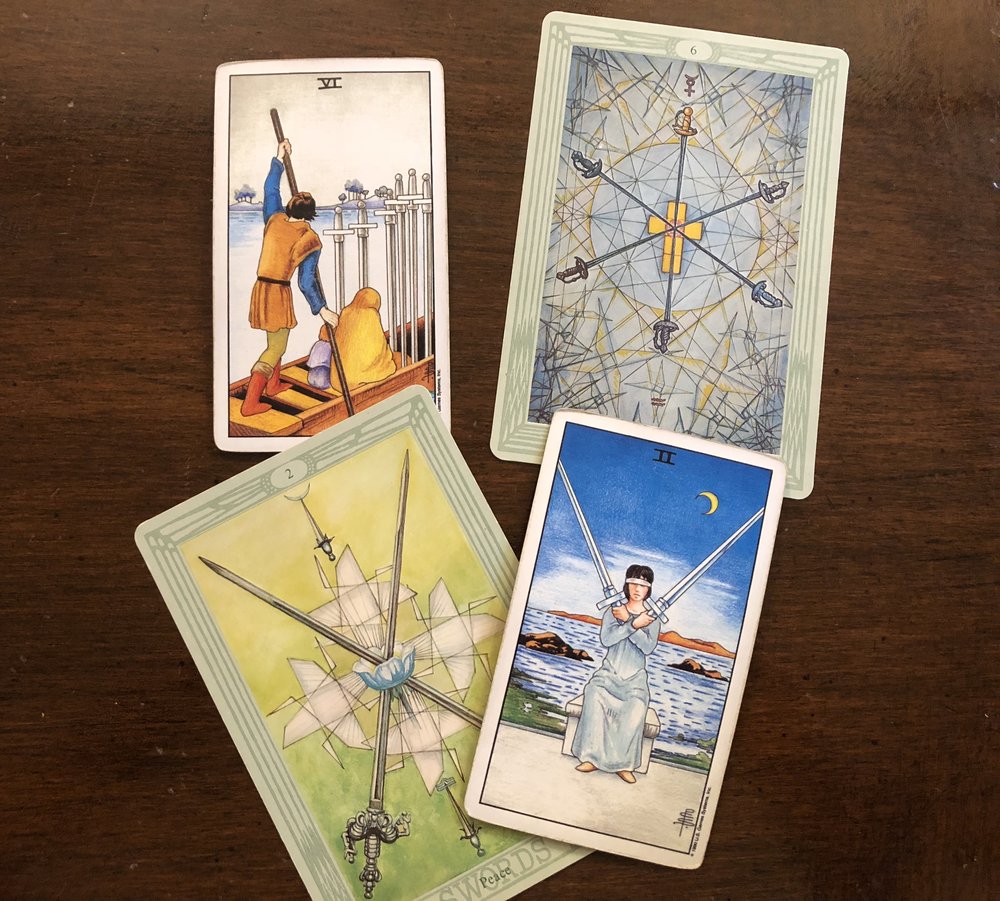 I am a Waite-Smith reader who uses some Crowley keywords. This is my confession.

One of the things that separates the Crowley-Harris-Thoth deck from the Waite-Smith deck is the keywords on the Minor Arcana cards. To my knowledge, Crowley was the first to use printed keywords on the cards, though many card designers have followed suit (pun intended). Some decks use the actual Crowley keywords, some don't.

Yet, there are some Crowley keywords that I love. Those keywords have given me a more complete understanding of specific cards.

My two favorites are "Peace" for the Two of Swords and "Science" for the Six of Swords. I also love "Works" as opposed to "Work" for the Three of Pentacles.

When we look at the Waite Two of Swords we think of decision-making. Adding "peace" to that concept allows for a time when a decision can't yet be made. It gives us permission to be at peace with our indecision as we wait to hear our guidance.

The Waite Six of Swords clearly speaks of sailing toward smoother waters, but how are they doing that? What is making the waters smoother for them? This, for me, is where Crowley comes in. "Science" makes sense when we look at the Waite image. How are those swords staying up in the boat like that? The airy, logical swords are floating above the waters of emotion. For me, the "Science" keyword offers the advice inherent in this card.  When this card appears, I often find that the way to those smoother waters is to think logically, scientifically, rather than emotionally.

I used to wonder if my cherry-picking of Crowley's tarot wisdom and adding it to my understanding of Waite's deck was something of a tarot abomination. Crowley and Waite hated each other in life. In fact, the Crowley tarot was in many ways an in-your-face response to Waite's publication of his deck. I've pondered on the relationship between Waite and Crowley before , wondering what it would have been like if they had had social media.

I have also wondered if my combining of tarot traditions might be frowned upon by traditionalists. It felt a little like invoking Celtic and Egyptian deities in the same ceremony.

Then I thought about my favorite fusion restaurant, where my husband could order steak and potatoes and I could order malai kofta.

These days I don't think my brand of tarot fusion is confusing or disrespectful. For me, tarot reading is an operational thing. Whatever gives the best readings is the right thing to do. Adding a few resonant Crowley keywords to my Waite tarot vocabulary expanded my tarot practice exponentially.

This is particularly interesting at a time when many new tarot decks are being published and some of them with slightly (or, in some cases, grossly) different meanings than what we would consider classic.

I have heard a certain tarot wisdom that suggests we learn a deck creator's meanings for their deck, and refrain from using other interpretations. While it is certainly helpful to understand what a deck creator was thinking when they took a departure from traditional tarot, I don't think we are ever bound to a deck creator's concept of the cards.

In some ways, the body of tarot is a living thing. Any new deck or book adds to that body of knowledge.

I think we need to be free to use tarot knowledge wherever we find it, and apply it to whichever decks we prefer, regardless of the intent of the deck creators.

In this way, we allow tarot to be the best tool it can be, which is what any deck creator would want for their creation.